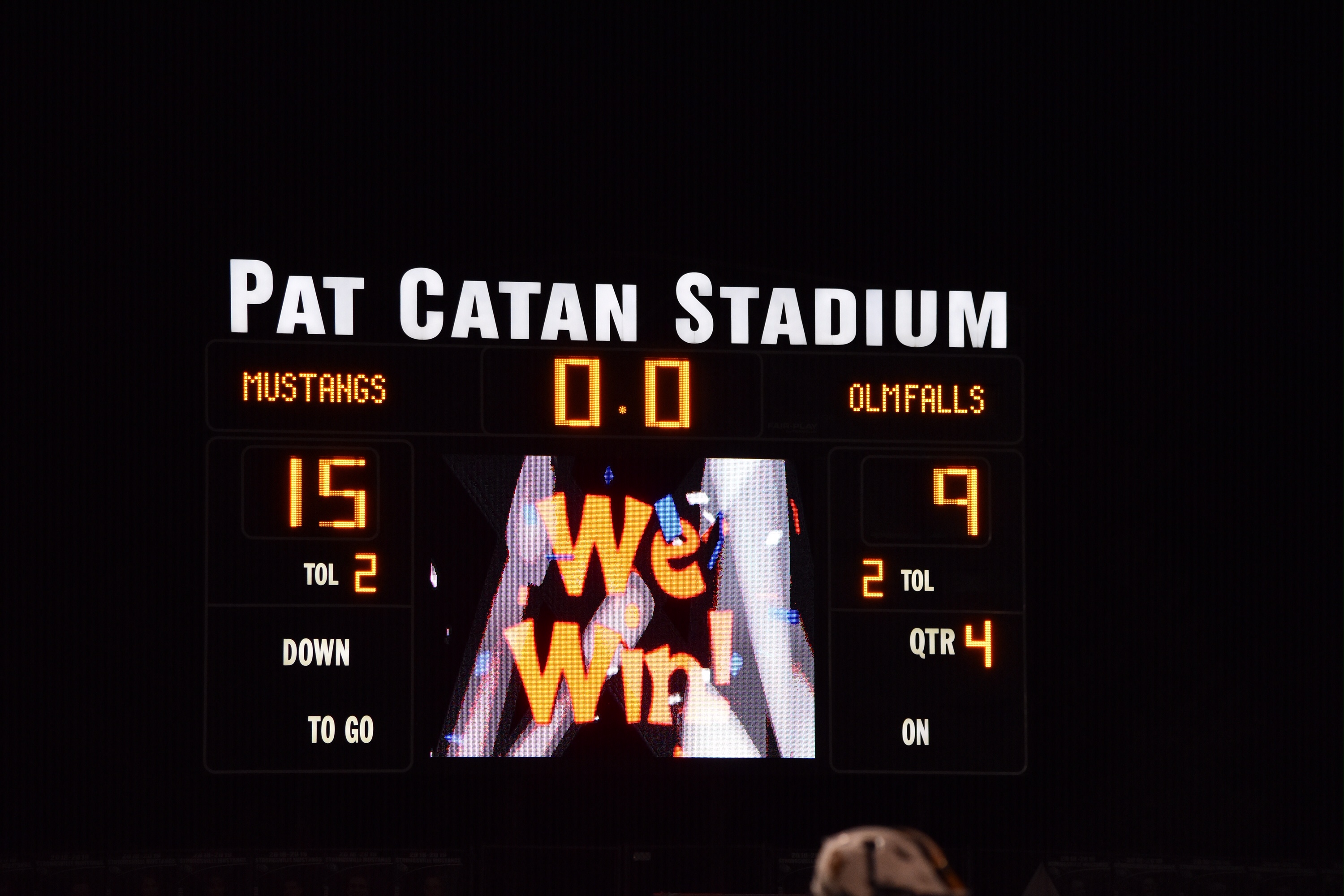 Its playoff time and the Mustangs earned a home game! The OHSAA Division 1 schools are divided into four regions and Strongsville competes in the very difficult Region 1. To kick off the playoffs, the Olmsted Falls Bulldogs (8-6) traveled back to Pat Catan stadium on May 14th to face the Strongsville Mustangs (12-5) for the second time this year.

The Mustangs have outscored opponents 57-26 in the first quarter and in nearly all their games, they have scored first. However, on this night, the Bulldogs scored first. That motivated Nick Adams to muscle his way past several defenders to tie it up at the 8:30 mark. 80 seconds later Andrew Keating found Ben Giera circling the crease. Giera made a nifty fake to drop in a goal; making it 2-1 with 6:50 left in the first quarter. The Bulldogs answered 3 minutes later to knot it up 2-2. Brendan Spooner found lefty attackman Zach Massa who hit the back of the net to make it 3-2 in favor of the Mustangs to end the first quarter.

To open the second quarter, the Bulldogs scored three goals over an 8 minute span and took a 6-3 lead. Jony Major won 59% of the face-offs on the night. However, with just 3:20 minutes left before half, Major had a rare loss. The Mustang defense wreaked havoc and Andrew Keating collected a groundball. Keating found Ethan Dewes streaking toward open space. Dewes pushed it in transition and found Adam Dubsky who rocketed the ball past the goalie to make it 6-4. That play gave momentum to the Mustangs. Then Major won the next faceoff, Brendan Spooner scooped up the ball, and found the back of the net; it was now 6-5. Less than a minute later, Giera assisted Keating who tied it up 6-6 at the half. Those three goals occurred in just over one-minute’s time. This would set the tone for the second half.

The start of the third quarter saw both teams trade a pair of goals. However, after scoring with 9:07 left in the third quarter, the Bulldogs could not shake the Mustang defenders. They only scored one more goal for the remainder of the game. Defensive midfielder Zach Zoul and the long poles Ethan Dewes, Cooper Hawk, Josh Jellinek, Ryan Seefeldt, and Richie Roskoph grabbed 15 groundballs and caused 5 Olmsted Falls turnovers on the night. Patrick Grealis saved 53% in the cage. Strongsville won with a final score of 15-9 and moves to 5-0 all-time versus Olmsted Falls.

The Strongsville Mustangs (12-5) advance to the Regional Quarter finals and will travel to face the Dublin Coffman Shamrocks (16-1) on Friday, May 17th. This is the first ever meeting between the two. The Shamrocks are the #1 seed in Region 1 and according to MaxPreps.com is the #2 in the state.

MUSTANG MUSINGS…
• 12 – Wins for the year is the most in Strongsville lacrosse varsity and club history.
• 6 – Assists by long pole Richie Roskoph for the year. He had two vs the Bulldogs.
• 6 – Teams out of 18 teams in Region 1 are in the top 25 in the state according to MaxPreps.com.